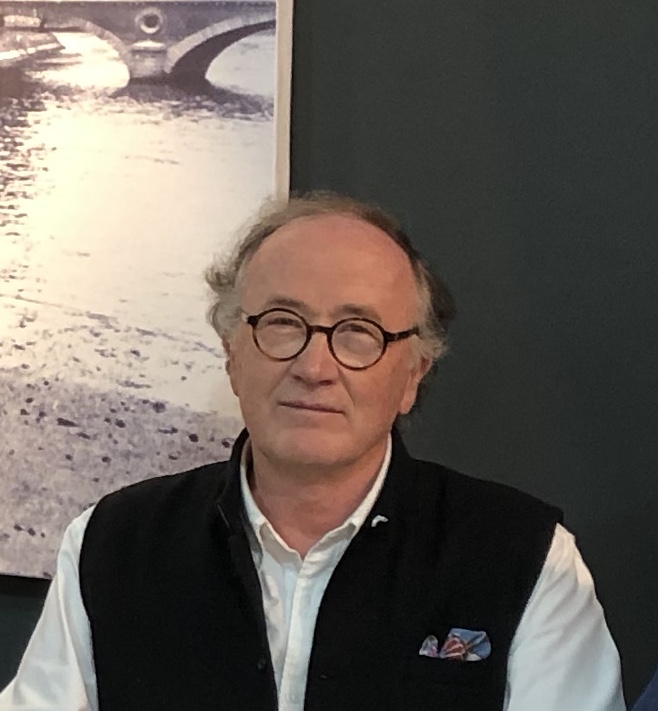 Trained in the elite Ponts et Chaussées engineering school, Paris, with an MBA from INSEAD, Michel Testard spent many years in strategy consulting till India cut across his path in 1999 and transformed him from being a business advisor to becoming a painter. A painter of the ethos of India.

The powerful, diverse, mysterious world that is India inspired him to expand his artistic quest over a twenty-year journey, a true ‘Samadhi’ in Art.

Michel has been painting for more than twenty years on a series of mostly Indian themes:

Cartoons and metaphors,
Landscapes, including ruins and forts, rural India, India from the past
People of India … in rural, urban India, or musicians, nawabs, rajas and VIPs
Cities, streets, urban colonies and slums, smart or mad cities
Pollution, people wearing masks, metaphors on masks
Others, western inspiration and more abstract exercises.
Michel looks at the Indian Universe with an open eye, like an admiring friend with both the appetite and audacity of a child. To the people of India, Michel offers impressions, fleeting glimpses of Indian subjects that perhaps other eyes do not see. To Europeans, Michel provides some insights on the mystery that India is upon on western imagination.

Even though he is essentially a self-taught painter, one can see the multiple influences on his work ranging from the European cartoonists: Hergé, Uderzo, Wolinski, to the great names of XXth century art: Gauguin, Braque, Matisse, Vuillard and de Stael. He is also drawn to the founders of Indian modern painting, Sher Gil, Tagore, and the Progressive Group Masters like Hussain, Raza, Souza, Ram Kumar and Sanyal.

Do NOT follow this link or you will be banned from the site!